Since I am starting the process of funding for my latest series (link here to my go fund me should anyone be interested in donating anything) I would like to touch base on the trip that inspired me to take this amazing 6 month loop through the US.  My best friend and I had a goal that last year we would see the Grand Canyon apart of our new years resolutions and we did it.  After months and months of planning to see each other on other trips and not one of them falling through we decided to jump the gun.  So, I bought a plane ticket and flew out to Texas to see her.

Upon arrival we spent one night in Texas, where she currently goes to grad school at,  then the following evening headed out west on the 16 hour car ride through Texas, New Mexico and Arizona to the canyon.  Honestly, out west the amount of time we spent in the car really didn’t make a huge difference to us and for the most part was fascinating since this was the furthest west we both had been.

When we arrived in Arizona the sun was just rising which was beyond gorgeous reflecting off the red sedimentary rocks.  As we bounded our way to the canyon we arrived just a little after 12pm but could not check into our room until 4 (as to why hotels wont change this policy to this day still blows my mind) but we headed in all our 16 hour car ride glory to the canyon just to go ahead and start the adventure and satisfy our itch to shoot. 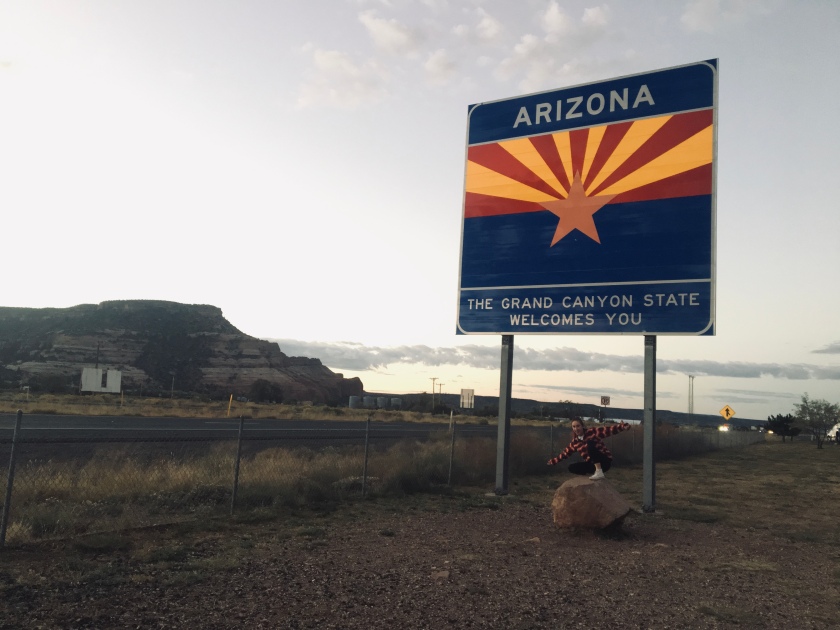 The canyon is one of the most breathtaking things to see in ones lifetime and I am glad that we both decided to make this trip to see it but not only were we able to view it from the top but we also got the chance to hike down into it on the South Kaibab Trail (photographed below). 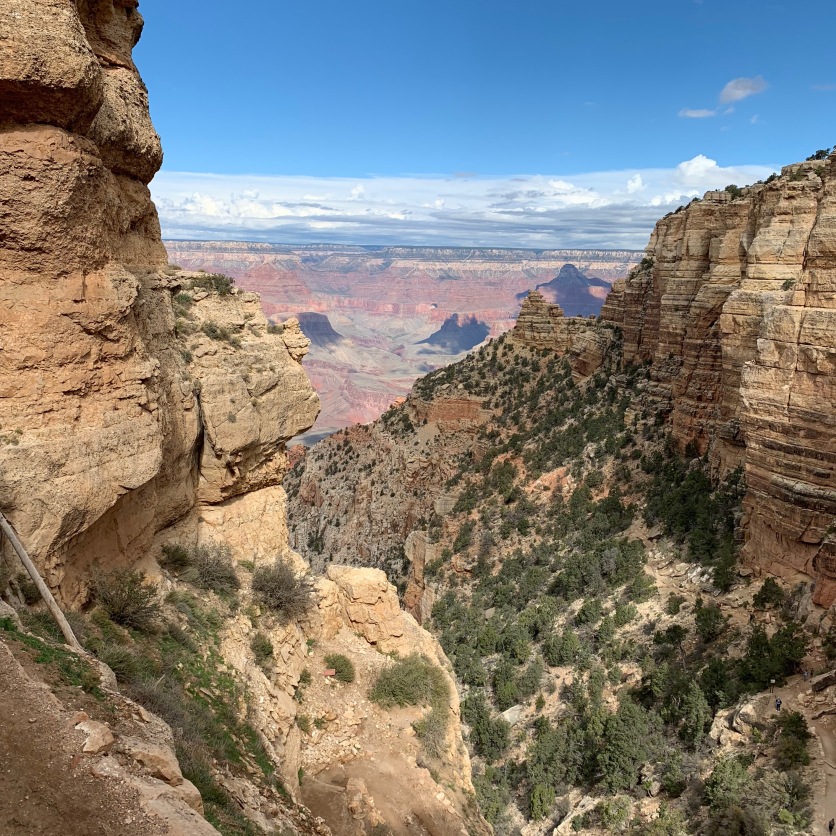 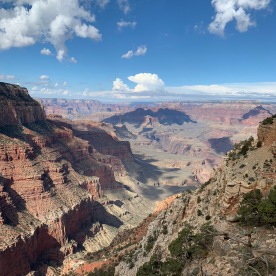 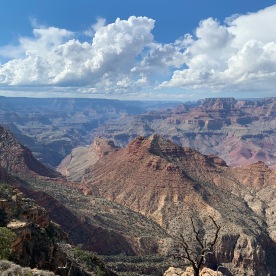 Now what was great about hiking this trail was the amazing views and the enamoring feeling about literally being surrounded by this great masterpiece of land.  What was NOT great was getting all the way to the “ooh ahh point” to take pictures and realizing that you only have half a bottle of water left because your best friend spilled half of it on the walk down.  Also, turning around and realizing that you have to go back UP the steps that you walked so easily down with that little water.  Anddddd realizing that you are in the middle of the desert and forgot to bring sunscreen.  Needless to say though, probably the coolest thing to happen upon reaching back to the top after all those factors was coming face to face with a female elk (photographed below). 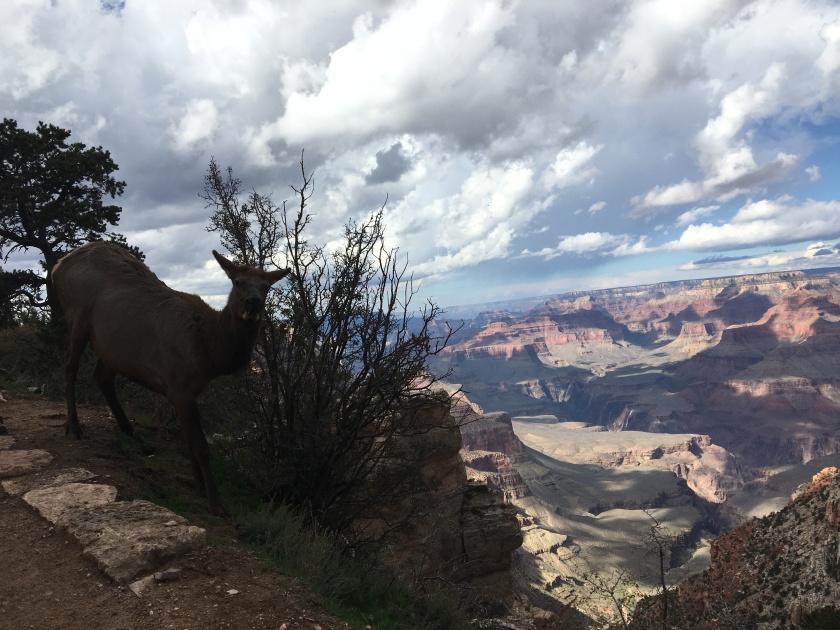 This was a trip of a lifetime but this was not our only stop out west, stay tuned for more shenanigans in my Part 2 post.  In the meantime here is a film shot I got of some more elk. 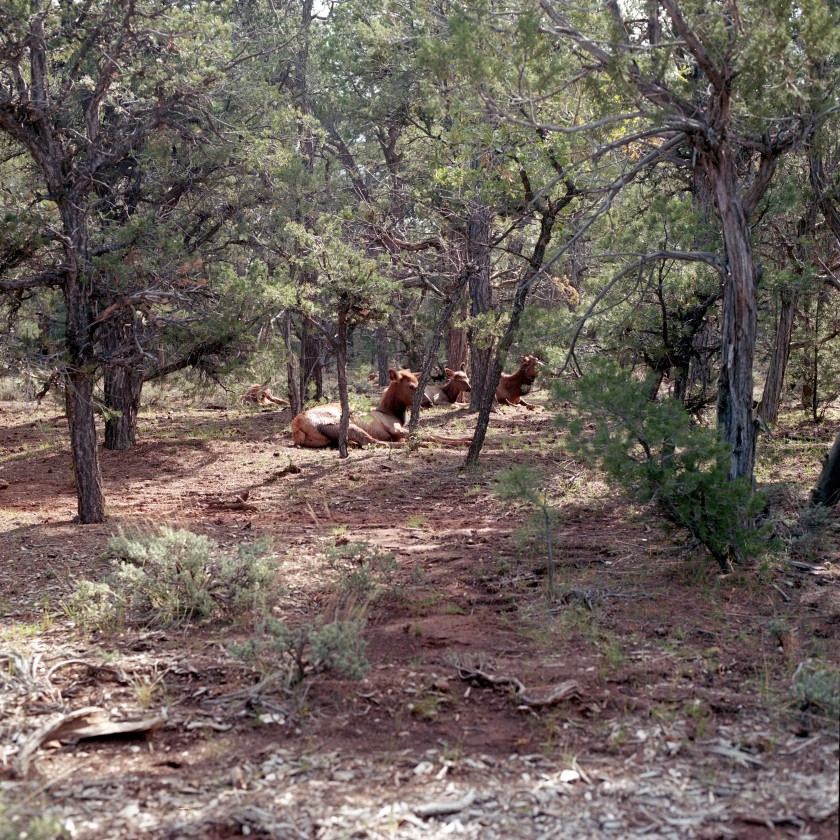 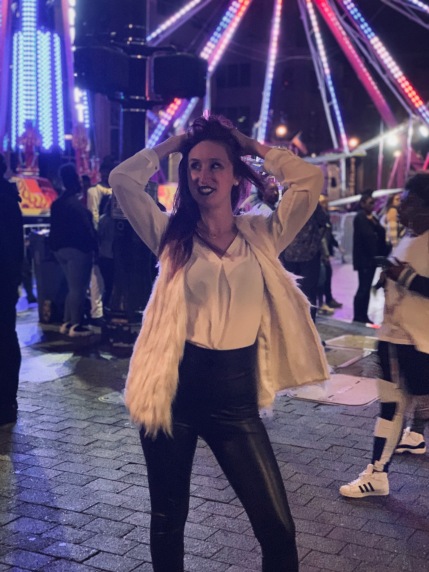 Welcome back everyone!  I hope this year has brought on great ventures and prospects for everyone of you but I of course kicked it off Nomad style and went out of town for a couple of days to photograph between the low country and in the mountains in the preparation of my latest series Nomad: On The Road.

Nomad: On The Road is the sister series to my prior project completed in undergrad called Nomad which involved myself out in the rural southern landscape photographing the landscape as well as different objects that I found in the field.  This sister series (Nomad: On The Road) will embody that notion of wandering but will be a much more intensive look of the landscape throughout the United States.  I will be embarking on the road doing a six month loop through the majority of National Parks, landscapes and city-scapes in the nation.  I will be primarily living out of my Jeep Patriot as well as with friends and camping along the way to get the full nomad experience and to really take in the life and culture of each location that I visit.

I hope to show with this series that there is much to see across the U.S. and that our multi-faceted landscapes and cultures are what unite us as a nation and not what divide us. At the end of the day we are the United States of America and not the divided states. The solace, beauty and joy we can all feel throughout this country from Appalachia to the desert deserve a visual pride that we all share with the joy that is our country.

I have begun the imagery for this series on my past road trip to the Grand Canyon.  My best friend and I drove from Dallas all the way to Arizona (16 hours total non-stop) and photographed the canyon as well as Gila National Forest and White Sands National Monument in New Mexico.  Below are the images for the start of my series. 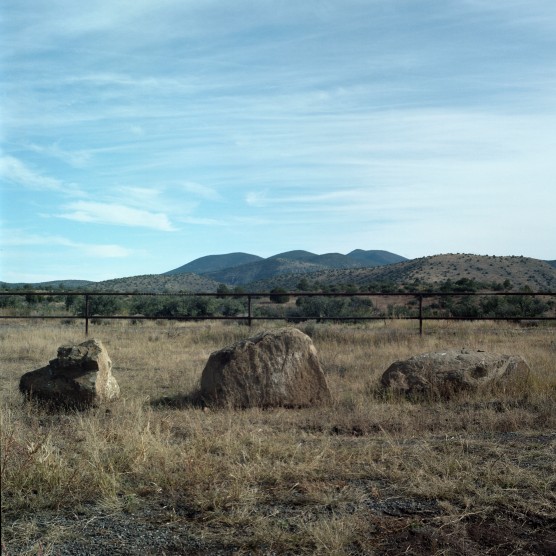 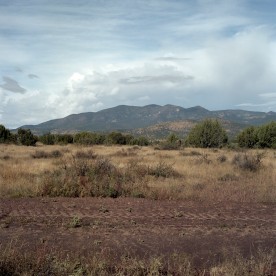 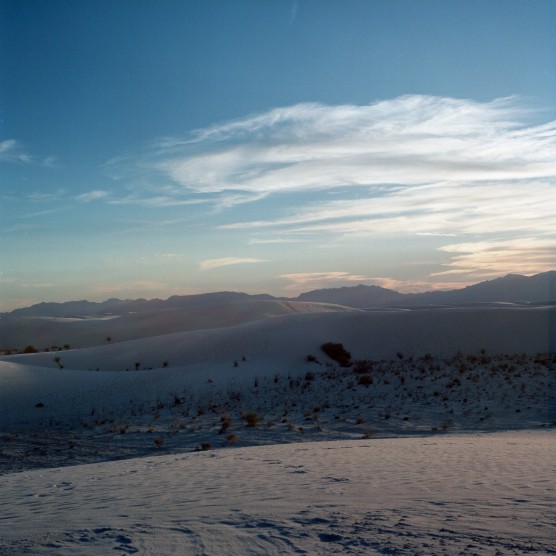 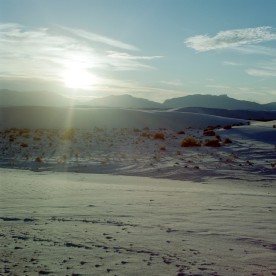 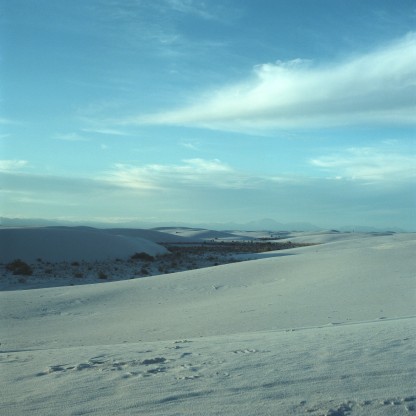 I am now calling on you all my loyal followers and friends.  If you have any supplies or know any way you can help me with gathering supplies that I will need for this trip I would much appreciate it.  If you are a brand that is wanting someone to represent your brand as an ambassador, I am open to collaboration and support of any kind!  This is an intensive project that I am embarking on with hopes to show in galleries as well as make into a book after completion of the six months photographing and editing while on the road.  Send me an email on my contact page and lets collab whether you’re Charlotte based or not I want to hear from you and to connect!

If anyone knows of how much I enjoy bourbon wellll its probably only my boyfriend at the moment because for the longest time I HATED IT.  Until I moved into this amazing city and got a chance to try some quality bourbon I never liked the taste of it until now and luckily I am blessed to be in a relationship that we share that love and appreciation of bourbon.  So, when in need of something to do this past Labor Day weekend and every other option to be booked up I decided “hey lets go to the Makers distillery like you wanted for your birthday” and of course my boyfriend jumped for joy at this idea and we took off for Kentucky.

Now explaining this trip to friends did NOT make sense until I told them further that I would be at the birthplace of America’s finest bourbons and would be attending multiple tastings did they started to get the picture.  So as promised and posted on my Instagram I would like to share with you more of my experiences in the beautiful bluegrass state of Kentucky.

As stated earlier we ventured first to the Makers Mark distillery and OH EM EFFING GEE the property was probably one of the most beautiful I have seen.  Grass was BEYOND green and the glass artwork done by Dale Chihuly (shown below) visually command the same effervescent expression that the bourbon does.  Lets just say that these people are serious about the amazing brand and bourbon that they have created and it shows throughout the entire property.  To the left of this excerpt is myself with the bottle of Makers that I got the chance to dip on my own.  I learned on our tour that only SIX PEOPLE are hired to hand dip Makers Mark bourbon and they are rotated throughout the course of two years.   This fact shows that the craft of keeping their product as handmade as possible is still kept alive which is something I am a huge sucker for, what craftsmanship!  While the people hired for the wax bottle dipping last two years on the job per usual standards I don’t think I would last a minute on this task force but for my standards; my bottle is perfectly imperfect just the way it is. 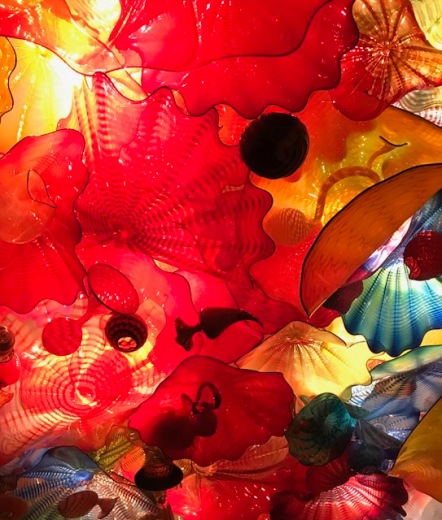 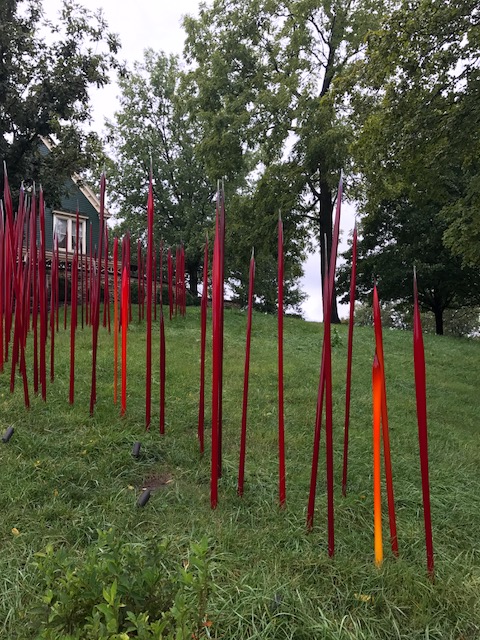 As I stated (and i’m sure you can get a feeling from the photos) this property was amazing and definitely one that I want to revisit in the near future I hope.  But, onto the next venture, the Buffalo Trace Distillery being equally as fascinating. 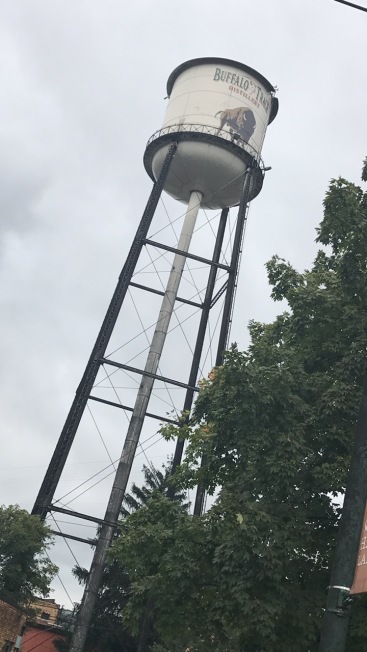 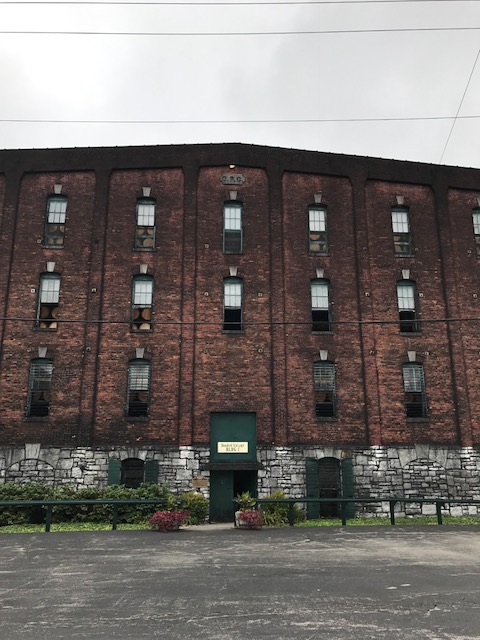 This distillery due to the nature of how many bottles they produce a year was learned that you literally cannot smoke anywhere around the property due to the amount of “Angel Shares” (aka bourbon fumes that are released from the barrel) making the air flammable.  Not, of course, that I was smoking but the SECOND you get on this property you can smell the rack houses and the barrels releasing Angel Shares into the air.  It’s, for lack of better words, intoxicating.  I was not a huge fan of the Buffalo Trace bourbon per say as much as I was Makers Mark but their latest Eagle Rare 10 year old bourbon was phenomenal!

Now, even though most the distilleries are only but a few miles apart you have to travel through the country side of Kentucky to get from one to the next.  This distance is equivalent to driving through the mountains, not a far drive but the

winding roads and long pastures to go around make the trip tasking from one to the other so these were the only ones we ventured to on this trip.

However, I would also like to note about another bourbon we tried while out in the city of Bardstown that I thoroughly enjoyed but we unfortunately did not make it to this distillery, the Four Roses Single Barrel.  I could drink this bourbon on the rocks anytime, any day and anywhere so give it a buy next time you’re at the liquor store you wont be let down and have my word on that!

Further views of the trip are photographed below as well as our visit to the ORIGINAL KFC!!!!  Which, let me tell you, no other trip to KFC will suffice after eating at the ORIGINAL ONE! Absolutely amazing!  So while Kentucky might resonate to you however stereotype that you want to think of it I recommend to take a road trip and try some amazing bourbon and get some good fried chicken.  You would be surprised at what you find you may like while there.  Thanks again QC and cheers! 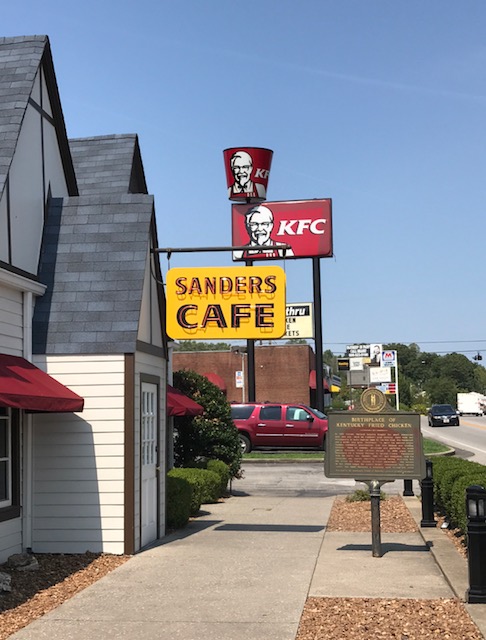